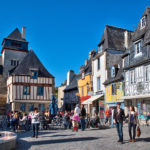 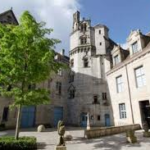 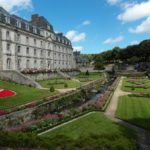 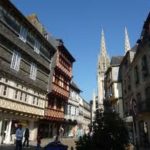 Quimper, the capital of the “department” of Finistère and also of this area known as French Conrnwall (“Cornouaille”), is a thousand-year-old city recognised for its artistic and historic significance through the label “Ville d’Art et d’Histoire“. It comprises three ancient centres:

Winner of the ‘Floral Town’ prize since 2003, Quimper is always a pleasure to visit. The town is unusually crossed by two rivers, one of which is the Odet, rated as one of the most beautiful waterways in France. A simple walk along the riverside with its flowers and pretty bridges becomes a photo opportunity.

On such a walk, you’ll pass the striking Théâtre Max Jacob with its formal gardens, the Rue Sainte-Catherine, and you can even continue to the beautiful estate of the Château de Lanniron nearby.

Faïence is a style of pottery particular to Quimper, hand-made and hand-painted and the production centre of Henriot-Quimper is open to the public, as is the Musée de l’Alambic. Guided visits of the city itself are offered by the Tourist Office and will help you to understand why the city has been awarded the prestigious label of “Ville d’Art et d’Histoire”. Quimper’s two theatres (Cornouaille and Max Jacob) have a year-long programme of quality shows that are as varied as they are fascinating, while the city hosts other events, shows and concerts throughout the year.