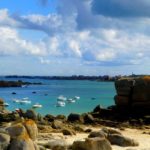 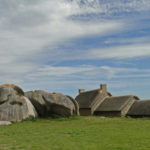 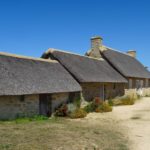 Hamlet brought back to life

The extraordinary coastal hamlet of Meneham, lies low amidst the great boulders that dramatically litter the Kerlouan coastline. The most startling building, a 17th-century coastguard’s cottage with stone roof, sits cunningly disguised between two huge rocks. It went up to spy on the sea in the period when France and England were at war. The village behind is of later date, built in part to house customs men trying to stop smuggling.

Recently, Meneham has been brought back to life as a showcase village. The lovely buildings set among the sandy grasslands have all been restored, many with thatch. Films projected in various parts tell of the communities who lived here in the past. Fine craft shops have opened in the semi-detached dwellings at the centre of the community.

One spectacular joy at Meneham is to clamber up to the top of the vast boulders encasing its most extraordinary edifice – from these perched platforms, you can scan the coast for long stretches, even as far as the Ile Vierge lighthouse.