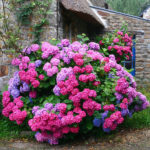 Thanks to the Gulf Stream, the micro-climate allows many Mediterranean plants to flourish here such as palm trees, eucalyptus, agapanthus, hydrangeas and geraniums, which enhance the beautifully tended gardens of the pretty stone cottages and villas. Bréhat also attracts its fair share of birds including gulls and cormorants as well as 270 pairs of puffins, which nest among the pink rocks.

The coast line around Ile-de-Brehat is especially varied, with small ports and beaches giving way to dramatic red cliffs and jagged islands jutting out of the sea, and many lovely views along the coast and across to the small neighbouring islands. The ferry drops you off at Port Clos, an inlet on the southern edge of Ile de Brehat, surrounded by attractive villas and gardens that would look more at home in the south of France than on an island off northern Brittany!

The highlights you should see include a 19th century fort and a nearby glassworks to the south-west of Brehat and an attractive little tidal mill called the Moulin du Birlot on the western coast. The nearby Chapel Saint-Michel is especially notable for the views from the chapel, which stands relatively high on a small hill – although high on Ile de Bréhat is only 26 metres altitude!

Of course you will also want to visit the town of Bréhat, called Le Bourg, which has basic facilities and a 12th century church (much modified in the 18th century) and lots of flowers if you visit in high season. A hundred years ago the town was a centre for post-impressionist artists, attracting among others both Gauguin and Matisse, and also has a reputation for inspiring writers and poets.

On the northern island you can see another small 19th century chapel, and also the Paon lighthouse, standing high on a raised rock peninsula jutting into the sea. The current lighthouse was built after WWII to replace the 19th century lighthouse in the same location that had been destroyed by the Nazis.

A legend tells that if a young lady throws a flat pebble into the sea from the two large rocks near the lighthouse, the number of bounces made by the stone is the number of years until the girl will get married.