You are here : Home » Culture & Leisure » Discover Brittany » The mythical forest of Huelgoat 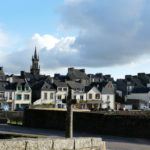 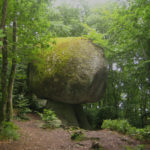 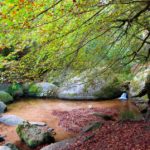 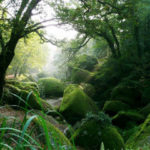 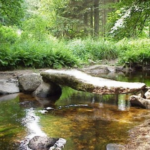 Imagine a day out where you can descend to the Devil’s Cave, clamber to the heights of the Great Trembling Rock, pass the Chaos Mill and the rushing streams – in the Forest of Huelgoat, there are so many legendary spots and breath-taking sights that it’s a day you’ll never forget.

Nestling in the heart of the Arrée Mountains, in the Armorique Natural Regional Park you’ll find the town of Huelgoat, which in Breton means ‘the wood from above’. This town is bordered by a 37-acre lake, and is on the outskirts of a state-managed forest that extends over some 2500 acres. Here, you’ll find the roots of countless legens born from the fascinating natural setting that has been forged by centuries of nature’s fine work.

The truly unforgettable sight on arriving in the Forest of Huelgoat is the astonishing array of rocks and moss-covered boulders, looking for all the world as if they were discarded by giants. They follow the course of the River d’Argent all through the forest and are some of the most astonishing natural formations you’re likely to see – best of all, it’s free to explore and children love clambering about these over-sized boulders.

The rocks themselves were formed in the depths of the earth, liquid mass fused together then gravitating towards the earth’s crust. Erosion would gradually have brought them to the light of day, some rolling down the slopes until they gathered together in the chaos we see today.

Legend has it that…
… Gargantua stopped at Huelgoat, struck by hunger, and asked the locals for something to eat. They only offered him boiled buckwheat broth that barely eased his hunger. Furious, he swore revenge and went elsewhere. Once he reached the richer lands of Léon, he satisfied his appetite then he took some of the round boulders from the sea and hurled them towards Huelgoat. They fell all along the river and throughout the Forest, creating the spectacle we see today….