Located on a peninsula of the very preserved northern Finistrian coast, the seaside resort of Carantec welcomes visitors since the beginning of the 20th century in the heart of the bay of Morlaix. Exceptional panoramas  and softness of life, jagged coasts and sandy beaches, not to mention the point of view of Pen Al Lan on the lighthouse of the island Louët erected in front of the imposing Castle of the Taureau, make it a popular tourist destination. 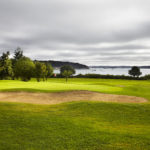 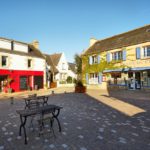 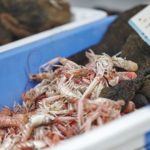 … and the breton Alcatraz 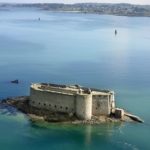 It is only by boat that visitors can get to this maritime fortress, Brittany’s only fort located in the sea. The departure time depends on the tide.

Built during the 16th century, re-built by Vauban in 1745, the majestic Château du Taureau used to be a protective fort, a jail, a second home and a sailing school before being threaten to fall into ruin in the early 1980s.

From Carantec or Plougasnou, this invulnerable fort is open to visit from April to September. Blockhouses, terrace, passageways, drawbridge… visitors are free to walk on the three levels of the fort.

About 15 themed signs give information about the unusual story of this vessel made of stone, sounds reproduce the atmosphere of the time in the main rooms and telescopes and viewpoint indicators guide the visitor to the horizon. Discover the daily life of soldiers and prisoners in the 18th century and meet key figures of the fort such as Vauban, Blanqui, Vilmorin…